TikTok announced a ban on political advertising all the way back in 2019. So you’d be forgiven for thinking the ugly problem of democracy-denting political disinformation doesn’t apply inside its walled garden of dancing Gen Zers. But you’d be wrong.

New research by Mozilla suggests that policy loopholes and lax oversight, especially around influencer marketing, coupled with an ongoing lack of ads transparency by TikTok — which offers no publicly searchable ad archive — are making its video-sharing platform vulnerable to passing off political ads as organic content.

Mozilla says it found more than a dozen instances of TikTok influencers across the political spectrum who were being paid (or otherwise compensated) by a variety of political organizations to promote partisan messages without disclosing that these posts were sponsored.

“Our research found that TikTok influencers across the political spectrum had undisclosed paid relationships with various political organizations in the U.S.,” it writes. “Several right-wing TikTok influencers appear to be funded by conservative
organizations like Turning Point USA, a tax-exempt nonprofit which has a dedicated influencer program specifically targeted at funding young conservative content creators on social media.” 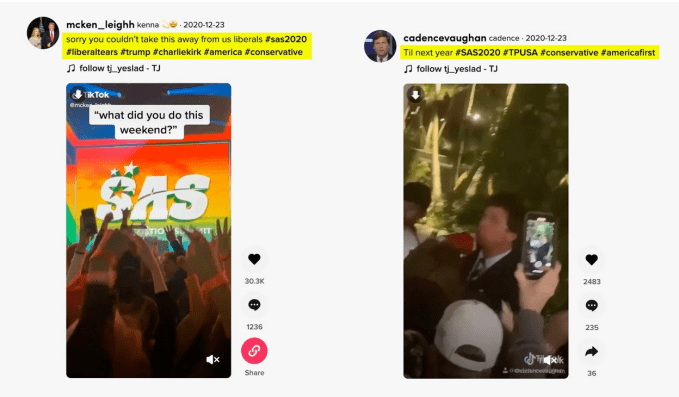 In the report, “Th€se Are Not Po£itical Ad$: How Partisan Influencers Are Evading TikTok’s Weak Political Ad Policies”, Mozilla calls out the platform for not offering adequate tools for “influencers” — aka users who have amassed a large enough number of followers to become attractive targets for advertisers to target for making paid postings — to report sponsorships, pointing out that other major social media platforms (like Facebook/Instagram) do offer such tools and can flag influencer content if they’re found failing to properly report ads.

“Of course, it’s hard to know exactly how self-disclosure ad policies are being enforced across platforms but TikTok is significantly far behind Instagram and YouTube when it comes to providing tools and enacting clear, strict, and transparent policies,” Mozilla writes in the report.

Per TikTok’s rules, content creators are supposed to self-identify any paid content (typically by using the hashtag #ad or #sponsored), in keeping with U.S. Federal Trade Commission guidelines for the disclosure of paid influence.

But, as Mozilla points out, if TikTok isn’t actively monitoring or scrutinizing influencer ads (as the report suggests), it raises an obvious concern over how the platform can claim to be enforcing its “trust and safety” protocols.

Mozilla’s report also points to rumours that TikTok is testing features that will allow influencers to pay to further promote specific posts — which could dial up the “dark money” political disinformation problem further, i.e. if not combined with active policing and enforcement of sponsorship disclosures.

“There do not appear to be any safeguards preventing creators from using this feature to promote paid political messages,” it warns. “It is unclear how TikTok is monitoring this content to ensure that it complies with their political ad policy.”

Another major criticism in the report is the general lack of ads transparency by TikTok versus other social platforms — with Mozilla’s report pointing out that it does not offer public, searchable ad databases as others (including Facebook/Instagram, Snap and Google/YouTube) do. Twitter has also had a searchable ads archive since 2018.

“Mozilla believes Facebook and Google are doing a poor job on ad transparency, so the fact that TikTok can’t match even them is troubling,” the report notes.

In recommendations to TikTok (or to policymakers shaping laws aimed at preventing abuse of such platforms) Mozilla suggests that it needs to develop specific mechanisms for content creators to disclose partnerships; invest in comprehensive advertising transparency, including launching an ad database which includes paid partnerships (not just native platform ads); and update its policies and enforcement processes to cover all the ways that paid political influence can happen on its platform.

TikTok was contacted with questions on its approach to ads transparency and sponsored content. It sent this statement:

Political advertising is not allowed on TikTok, and we continue to invest in people and technology to consistently enforce this policy and build tools for creators on our platform. As we evolve our approach we appreciate feedback from experts, including researchers at the Mozilla Foundation, and we look forward to a continuing dialogue as we work to develop equitable policies and tools that promote transparency, accountability, and creativity.

There are signs that TikTok is trying to get ahead of criticisms in the report — as Mozilla’s researcher, Becca Ricks, notes that the company has very recently (“within the past week”) created a branded content policy.

“It includes mention of a ‘branded content toggle‘ to help influencers disclose paid partnerships,” she went on, adding: “We’re currently analyzing the feature to learn more. But we’re cautiously optimistic that this could be a (small) step in the right direction, especially after we raised these issues directly with TikTok two weeks ago in the course of our research.

“That said, Mozilla’s other recommendations — and the entirety of the problems we uncovered in the research — remain. So TikTok has a long road to being truly transparent.”

Mozilla’s report is just the latest black cloud to fall over TikTok’s platform, which is under pressure on a variety of fronts related to its content and wider policies, including around ad disclosures.

Last week, EU regulators kicked off what they couched as a formal “dialogue” with TikTok following a number of complaints by consumer protection groups, which have accused the platform of hidden marketing, aggressive advertising techniques targeted at children and misleading and confusing contractual terms.

Other regional complaints have called out TikTok’s approach to privacy and user data. And it’s being sued in the U.K. over its handling of children’s data.

Concerns over weak age verification also led to an intervention by Italy’s data protection regulator earlier this year — acting on concerns for the safety of underage users. In that case TikTok was forced to remove more than half a million accounts that were suspected of being used by children younger than 13.

In recent months TikTok has been trying to burnish its image with policymakers, announcing what it bills as a “Transparency Center” in the U.S. last year — and another for Europe this April — saying these centers would provide a space for outside experts to access information about its content moderation and security policies.

However Mozilla said the centers suffer from a lack transparency vis-à-vis ads, writing in the report that they “do not provide detailed transparency regarding advertisements”, and specifying TikTok does not disclose specific data about “how many or which ads were rejected under TikTok’s ban on political advertisements”, for example.

TikTok’s opacity arounds ads looks to be on borrowed time as the issue of online political ads transparency is coming into sharper focus around the world.

In the U.S. a bipartisan bill to try to regulate online platforms that sell ads was introduced in 2017 — although progress stalled as the bill failed to pass ahead of the 2019 U.S. presidential election.

In Europe lawmakers are expected to put forward a regulatory proposal this fall that will tighten ad disclosure and reporting requirements on platforms as part of a wider package of digital reforms that aim to drive safety, transparency and accountability.

Source: Tech Crunch Social
TikTok called out for lack of ads transparency and for failing to police political payola