TikTok today is announcing a new in-app creation tool called TikTok Library, which the company hopes will make it easier for creators to access entertainment content and participate in trends. Initially, the Libary will be populated with select content from GIPHY, including its collection of GIFs with sound, known as GIPHY Clips. Over time, TikTok says it expects to expand the Library with additional content sources, audio and sounds, text templates and other TikTok creator content.

The company declined to share what sort of future partners it may have in store for those efforts, however.

Launched in 2019 as GIPHY Video, GIPHY Clips today are a way for entertainment partners like TV and movie studios, game makers, record labels, sports leagues, news media and others to share properly licensed content on GIPHY’s platform. Over time, the feature has expanded to include thousands of content makers who want to leverage GIFs with sound — also known as short-form video — to reach GIPHY’s hundreds of millions of daily active users. These GIPHY Clips can be shared anywhere across the web with a link, within messaging apps, in workplace tools like Slack and within other third-party applications via GIPHY’s developer toolset, the GIPHY SDK. 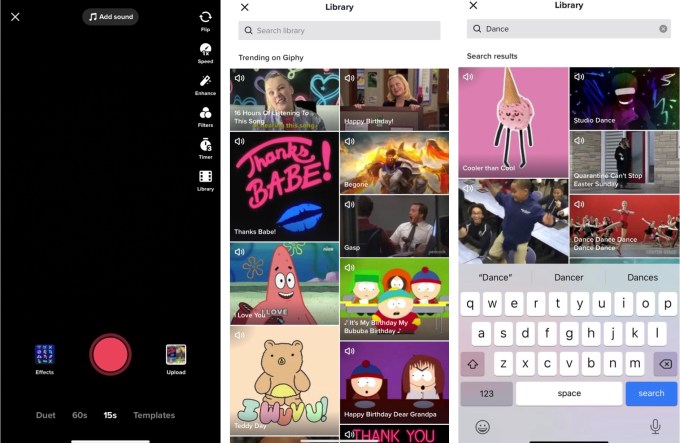 Reactions are those GIFs that capture someone’s raw emotion, while Quotes are memorable catchphrases and sayings from notable personalities. The People category could feature anyone with a fandom, like celebrities or athletes. And Iconic Moments are things like amazing sports plays, awards-show speeches and other unforgettable moments from big events. (Perhaps like the one we all just witnessed on Sunday at the Oscars?!)

The integration within TikTok will include a portion of the GIPHY Clips library in the tens of thousands, in addition to millions of GIFs from GIPHY’s wider library, a spokesperson for the company said.

Though TikTok already hosts a number of creative tools in its social video app, the company says it continues to look for new ways to help creators express themselves. That’s where the GIPHY integration comes in.

To use the feature, TikTok users will tap the new “Library” icon on the vertical sidebar in the app’s camera screen. Once in the Library, you’ll be able to scroll through the trending content or use the search bar to find something more specific. When you’ve selected the content you want to use, you can clip it to the desired length, then return to the shooting page to continue capturing video. 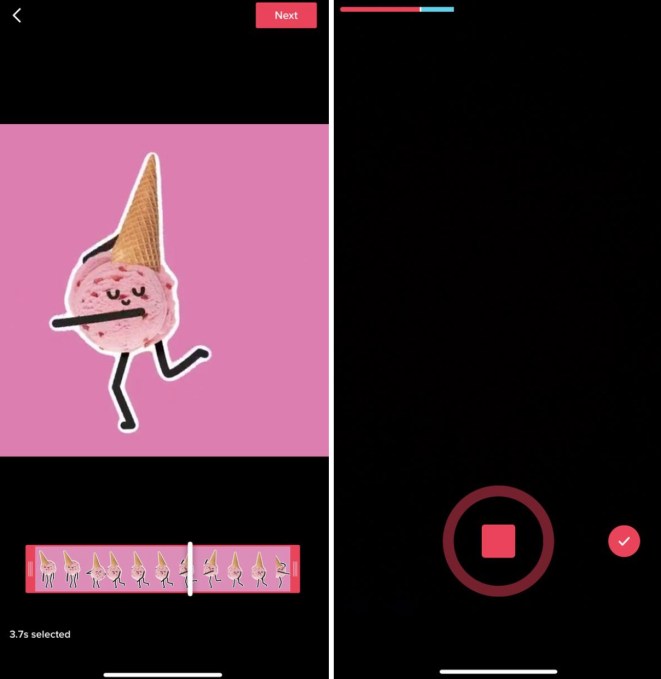 TikTok says the Library feature will first roll out to select markets on Android and will follow next week on iOS, before expanding to more TikTok users worldwide in the weeks ahead.

Of course, there’s some irony here with TikTok leveraging the content from a company Facebook had once acquired for $400 million to better the short-form video app that’s since become one of the social giant’s biggest threats. But Facebook, now Meta, had been blocked from fully integrating GIPHY as the U.K.’s Competition and Markets Authority (CMA) investigated the deal on anti-competitive grounds. In November 2021, the CMA ruled that Meta would be required to divest GIPHY. Meta is now appealing that ruling. But one has to wonder if a TikTok integration like this would have ever moved forward if Meta had been allowed to fully integrate GIPHY into its own company.

This isn’t TikTok’s first-ever GIPHY integration, to be fair. It had earlier launched Stickers and GIFs in Green Screen. But it is the first one to leverage GIPHY’s videos.

Though TikTok is characterizing the GIPHY integration as just the start of a much broader feature, the lack of detail around possible future partners hints that the addition is still very much in the early stages. By calling it “TikTok Library” it also sounds much more interesting than a simple GIPHY SDK integration.

Plus, by announcing Library before the feature is more fully fleshed out, TikTok can quickly capitalize on the momentum around the latest pop culture moment with this weekend’s Academy Awards, and its accompanying highlights and disasters, which have already been incorporated into TikTok videos with millions of views.