Do you want random Tinder users to see where you’ve been? Uh, no? Well, great news: an upcoming Tinder feature called Places will allow for just that. According to screenshots detailing Tinder Places uncovered by The Verge, the dating app is developing a feature that tracks your location via its app, then shows potential matches where you’ve been. The idea is to allow people to come across their real-life missed connections, similar to how the dating app Happn works today.

There are some caveats about the new feature. For starters, this is something Tinder has in testing – the way it works at launch could be different. Also, the feature can be shut off, the documentation says – a toggle in the app’s settings let you turn it on or off at any time. And we’ve learned that, thankfully, this feature will be opt-in.

However, that’s a decision you should approach with caution. 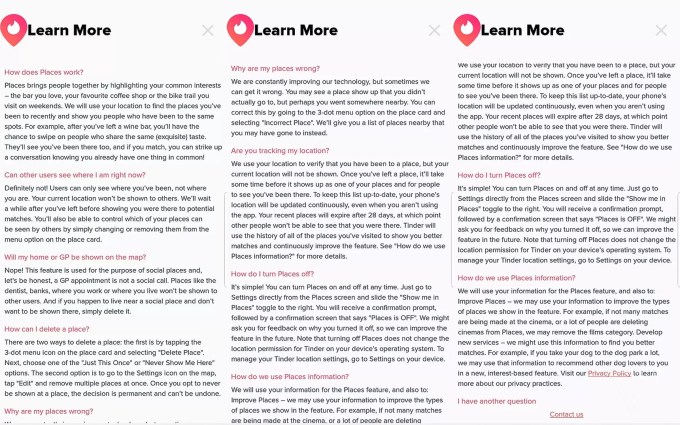 The way Tinder has implemented the location feature is concerning. Instead of allowing users to explicitly “check in” to a given place – like their favorite coffee shop or a cool restaurant or bar – Tinder continuously tracks users’ location with its app, then makes a determination about which of your “places” it will show to your potential matches.

The company, at least, thought to remove things like doctors, dentists, banks, and the place where you live or work from this automated location-sharing option. It also won’t add a place to your list until after you’ve left – though it doesn’t say how long it waits to do so. (The documentation hedges on the timeframe by saying things like “we’ll wait a while” or “it’ll take some time.”)

While Tinder says your recent places will expire after 28 days – meaning, other Tinder users won’t be able to see where you’ve been past that point – the company does appear to be keeping a wider history of users’ location and travels for itself. The documentation explains that Tinder will use this Places information in order to improve the product – by learning which places lead to matches, which users are always deleting, and it will use the data to improve its ability to show users better matches. 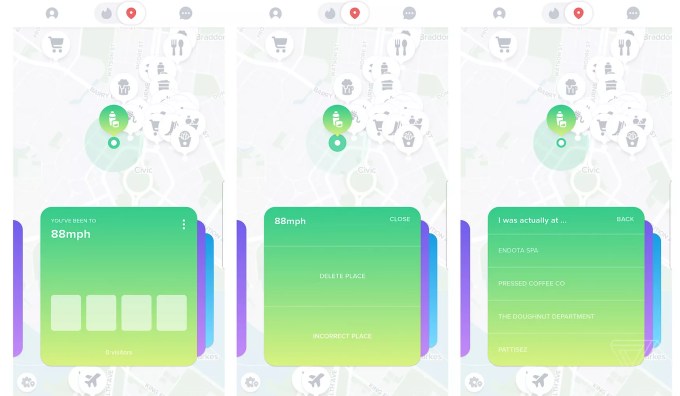 In other words, Tinder will be tracking you, as well as giving potential matches the ability to narrow down the parts of the city you frequent – right down to your daily habits. That means potential matches could figure our things like which bar you regularly hit up for after-work drinks, where you work out, what your favorite breakfast spot is, and so on.

The advantage to daters gaining access to this information about other Tinder users is fairly limited. After all, simply hitting up the same Starbucks in the morning isn’t any sort of signal about someone’s potential as a love match.

But it does put a lot more data into the hands of potential stalkers, while offering Tinder access to a massive treasure trove of location data – the selling of which, even anonymized and in aggregate, could be a big business. Even if Tinder doesn’t aim to sell the data directly, it clearly paves the way for the company to show more specific location-based ads in its product.

It also lets Tinder group users into cohorts regarding their interests – without explicitly asking for that data, like Facebook does. For example, Tinder would know if someone shows up at church every week, or regularly takes their dog to a dog park – things it could use to classify users and match them accordingly.

That’s useful to some extent, in a handful of cases – but just because you have a dog, doesn’t mean you need to date someone with a dog, too. In the end, it’s less useful to have “things” in common with people – it’s more useful to share the same values, experts say. And those values are more important than the initial attraction (which fades as the hormones wear off), and more important than a set of common interests – those can be negotiated in a relationship.

In the end, there’s far more for Tinder to gain here, than users to gain from the Places feature – especially with the downside regarding its potential for harassment or stalking.

One serious concern was whether Places would be opt out or opt in – the documentation The Verge found didn’t make this clear. However, we’re relieved to hear (from people familiar with product) that Places is an opt-in experience.

This feature’s impending launch is not really a surprise. Tinder already said it was working on rolling out a new location feature this year during its earnings calls, something it described as having the potential to bring in a new audience and “expand the definition of dating.” That could imply the company wants to make Places more of a social networking, or friend-finding feature, rather than just an option for finding dates.