Truecaller has been dabbling in building out a family of apps to dig deeper into the different ways that people now communicate, but it’s also adding better performance to its flagship app, too. Today, the company released a major update to its eponymous iOS app — touting better spam detection, faster performance, quick onboarding and a smaller app size. Most notably, the company says the update addresses user concerns by bringing the iPhone app on par with its Android counterpart for call detection.

The update comes on the heels of some welcome news for the app from the country’s Supreme Court regarding its handling of user data and privacy. Back in March, an investigation alleged that the platform’s datasets were “comprised of details which have been collected without consent.” Just yesterday, however, the Court announced that it would decline to hear the case, effectively closing the door on the matter (for now, at least).

The app update doesn’t address any of the issues that were raised in that March investigation: its aim is to improve speed. To improve its call and spam detection, the firm said it rebuilt the iOS app’s code base to take better advantage of Apple’s CallKit API. In the legacy version, the app could store only a limited list of spam numbers and caller IDs locally. Trucaller claims that the new version can store a 10 times bigger list on the phone to quickly detect callers.

Truecaller also said that the local caller ID list will grow as more people use the newer version. The list gets updated every three days for free users and every day for premium users for faster caller identification.

The caveat is that to enable features including identifying verified business calls, spam calls, previously searched numbers, and calls from other Truecaller users, you need to go to Settings > Phone > Call Blocking & Identification and turn on all toggles. This only applies to the iPhone as users on Android are not required to go through the same settings. Unfortunately, Truecaller doesn’t specify any toggle-feature mapping, so you’ll have to either enable all of them or adopt a trial and error method for turning on exact features. 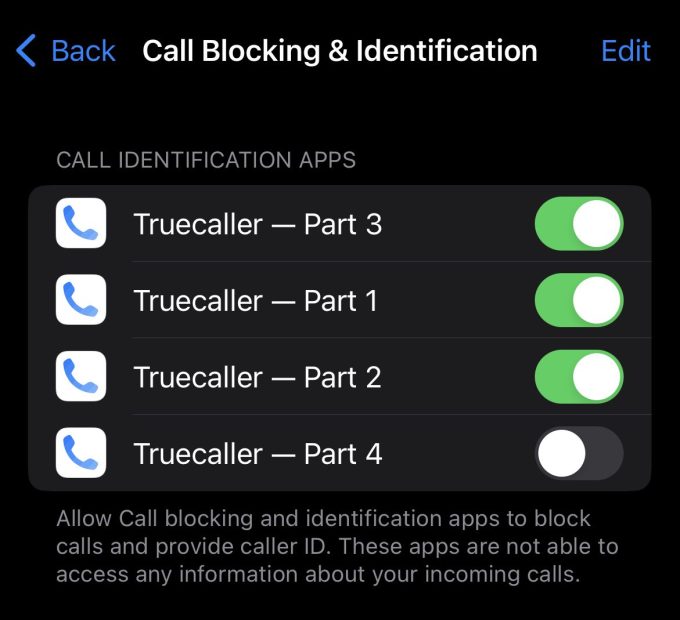 By rewriting the code, Truecaller claims it delivers a faster experience even on older iPhone models — as far back as the iPhone 6S. The company touts that it has provided a 30% smaller app size overall and 50% speed improvements on most iPhone models. The updated app (version 12.0) also requires your iPhone model to run iOS 14 or later — unlike the earlier version which had iOS 13.0 as the minimum requirement.

The underlying changes also improve the Premium purchase flow to let users easily pick the paid option over the free one — to get an ad-free experience and features such as the ability to see who viewed your profile on the app and unlock “advanced” spam blocking. Moreover, users will start seeing a search icon next to the phone numbers they’ve already searched on the app.

Since Truecaller’s spam detection relies on user reports to a large extent, the performance of features including live identification of pesky, spam and scam calls on the iPhone will take some time to bring any noticeable improvements.

“This update has been a long time coming for many iPhone users, and now we can offer them the best performing identifier of spam and scam to help them separate the noise from the communication they want to respond to,” said Alan Mamedi, co-founder and CEO of Truecaller, in a prepared statement.

Truecaller also plans to align the experience with the release of iOS 16 in the coming months by bringing features including advanced SMS filtering. Furthermore, it is working on introducing an ability to automatically block top spammers and let iPhone users view detailed statistics on spam-marked numbers as well as view and contribute comments on its spam-marked numbers for additional context. Though, exact details on when these updates will be available are yet to be announced.

Currently, iPhone users account for five percent of Truecaller’s total base of 320 million monthly active users. The company, though, seems to be working on expanding its presence among Apple consumers by introducing new updates.

Truecaller works by asking users to give access to their phonebooks for caller ID and collecting reports about spam numbers from its community. Because of this model, the company has data of people who might not have given consent for their number to be shared. To mitigate that, the firm offers unlisting services for users who don’t want their ID to be on service.

The way that Truecaller detects and handles its caller ID service has raised privacy concerns in the recent past. The investigation carried by Rest of World and Caravan India earlier this year alleged serious issues related to that. However, the company refuted the allegations in a blog post and said that the investigation was based on inaccuracies.