Twitter’s slate of new product announcements is not slowing down. The company today introduced a number of new initiatives aimed at better serving the conversations and community using its platform, including support for tipping with crypto, NFT authentication and plans for other experiments designed to provide more context about a conversation to those just joining in. The company also said it’s preparing to launch its own creator fund in a few weeks to provide audio creators with access to financial, technical and marketing support.

While Twitter was not yet ready to detail specifics, like the fund size or expected reach, in terms of creator participants, it’s a clear shot across the bow of a top competitor in social audio, Clubhouse, whose own creator “accelerator” offered to connect its participants with brand deals or $5,000 per month during their participation in its program. 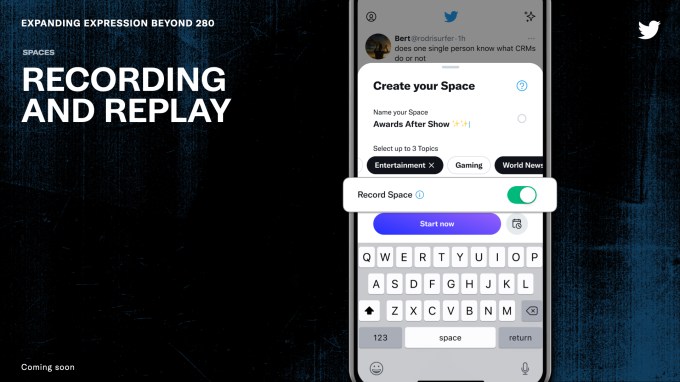 “The goal of it really is to provide that technical and marketing expertise,” noted Twitter Product Lead for Creator Monetization, Esther Crawford. “We think of it as kind of a stopgap solution. We want to onboard these folks into other long-term monetization features. But we want to give them an initial boost,” she said.

Spaces hosts will also be able to record and replay their programs — a move likely meant to counteract the threat of competitive platforms which tout recording as a key differentiator. This will launch in a “few months,” the company said.

One of these is a new feature that would allow its app to better serve creators working with NFTs, or non-fungible tokens — a way to certify digital assets, stored on the blockchain. Artists are now creating NFTs of their work which are sold across NFT marketplaces like OpenSea, Rarible, Foundation, SuperRare and others. 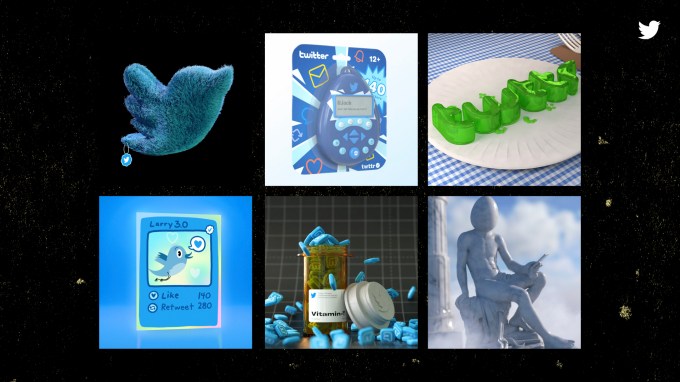 Twitter says it’s planning to “soon” explore support for NFT authentication. This would allow NFT creators to connect their crypto wallets to Twitter, in order to track and showcase their NFTs on the platform. This particular plan is still in the early stages as Twitter couldn’t yet articulate how this would work. The company said it was testing different ideas for making creators with authenticated collections stand out more visually somehow — perhaps with something like a profile badge or differently shaped avatar.

Another new feature in the crypto space is support for Bitcoin tipping. Twitter first introduced its “Tip Jar” feature in May as a beta product, allowing users to send and receive one-time payments via third-party services like PayPal, Venmo, Patreon, Cash App, Bandcamp and others. Now the feature will expand to global audiences on iOS with Android coming soon, and will add support for tipping with Bitcoin.

There will be a couple of ways Bitcoin tips can work. Users will be able to add a Bitcoin Lightning wallet or their Bitcoin address in order to start receiving Bitcoin tips. Lightning wallets are popular among users in the crypto community due to their lower transaction fees, the company said. Twitter’s implementation of this uses Strike, a payments application built on the Bitcoin Lightning Network that allows people to send and receive Bitcoin free and instantly, it said.

In fact, Twitter CEO Jack Dorsey this summer tweeted that it was “only a matter of time” before Twitter built support for the Lightning Network, a layer atop the Bitcoin blockchain, into its platform. At the time, there was some speculation that users would first see this sort of support in a micropayments product, which has now been proven correct.

The Tip Jar will also add a couple other services as well, including GoFundMe and Brazilian mobile payments service PicPay.

Another new experiment called “Heads Up” (for the time being), is the first that will help to give users a sense of a conversation’s vibe before they wade in.

One of Twitter’s thorniest issues is its inability to help people feel safe sharing their thoughts and opinions on its network, which has served as a breeding ground for cancel culture, and where armies of trolls can descend on marginalized voices or others they disagree with at any time — like activists, women in tech (as was made famous with the Gamergate scandal) or female journalists. 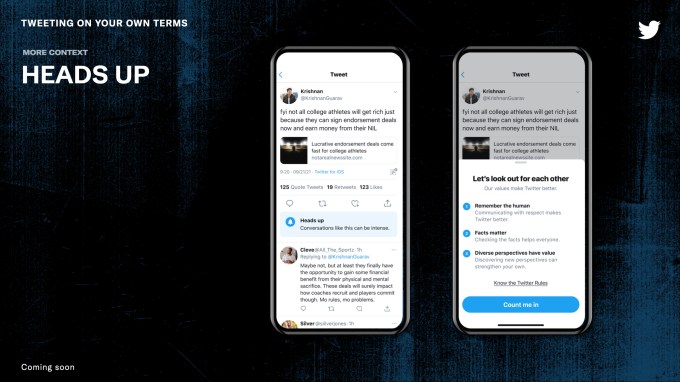 In this area, Twitter has worked to create new features like those that enable users to limit who can reply to their tweets, which it says has contributed to a decline in abuse reports over the past four weeks.

It’s also launched Safety Mode into beta, which offers a sort of automated level of protection against harassment during a time of heightened abuse. It created a way for people to quietly remove followers as an alternative blocking. And today, Twitter says it will soon launch a new feature that will allow users to remove themselves from a conversation they’re mentioned in and is experimenting with a new feature called “word filters” that would let users stop abusive tweets that don’t cross the line into being against Twitter policy. 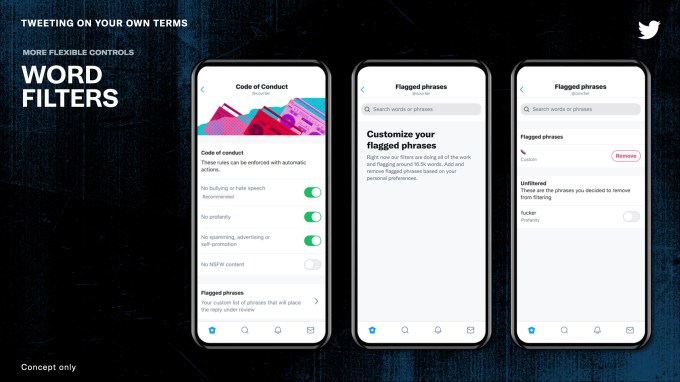 Twitter didn’t fully explain how it will measure a conversation’s vibe in the coming “Heads Up” feature, in order to warn newcomers about the nature of the discussion. But said it was considering leveraging data from its emoji reactions (which are only now in testing) and reply prompts, which warn users when they’re about to post something potentially offensive.

Today, it offered a few updates on a handful of these products.

It said it’s working on more Spaces discovery tools that would make it easier to find Spaces at the top of the timeline, and elsewhere in the app — a likely reference to the dedicated Spaces tab on mobile. It’s also expanding access to Ticketed Spaces, improving the discovery of newsletters, launching a new creator earnings dashboard, and working on more account labels — like those brands and those that would help memorialize the accounts of the deceased — among other things. 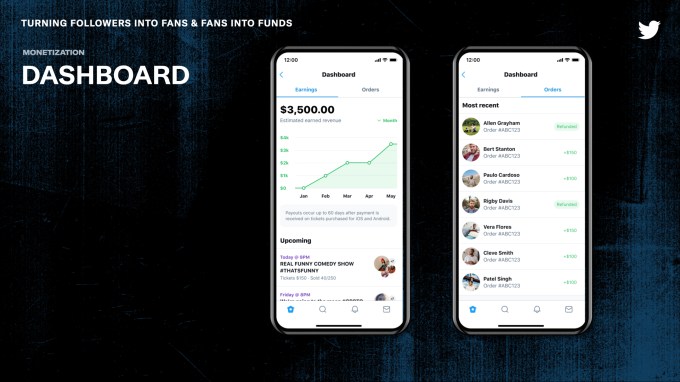 Twitter noted, too, how it plans to handle moderation within its Communities feature, saying that these interest-based destinations would have their own moderators and norms specific to that community, above and beyond the Twitter Rules.

“It’s our first step into decentralizing moderation, so that your Twitter is your space,” explained Twitter’s Product Lead for Conversational Safety, Christine Su, adding that Communities would open up to more people “soon.”

More broadly, Twitter attempted to explain its strategy, which is increasingly looking like “throw spaghetti at the wall and see what sticks.” In fact, it admitted — to some extent — it may be doing just that.

“You’ll keep seeing us push towards this vision through experimentation and iteration,” explained Twitter Head of Consumer Product Kayvon Beykpour. “You’ll see us share our progress publicly along the way, as we have over the last few years. And you won’t see us stay tied to the things that aren’t working. We’ve done that with Fleets and you’ll continue to see that with other explorations we test out. We believe that if we’re not winding things down every once in a while, then we’re not taking big enough bets,” he said.

Twitter’s announcements were detailed this morning at a press briefing and Q&A session, ahead of the publication of some of its news to its corporate blog.