Is “Twitter Stories” on the way? Or will we just get tools to send prettier tweets? Well now Twitter has the talent for both as it’s just acquired Chroma Labs. Co-founded by Instagram Boomerang inventor John Barnett, Chroma Labs’ Chroma Stories app let you fill in stylish layout templates and frames for posting collages and more to Instagram Stories, Snapchat, and more.

Rather than keeping Chroma Stories around, Twitter will be splitting the Chroma Labs squad up to work on its product, design and engineering teams. The Chroma Stories iPhone app won’t be shut down, but it won’t get more updates and will only work until there’s some breaking change to iOS.

They’ll join our product, design, and eng teams working to give people more creative ways to express themselves on Twitter

“When we founded Chroma Labs in 2018, we set out to build a company to inspire creativity and help people tell their visual stories. During the past year, we’ve enabled creators and businesses around the world to create millions of stories with the Chroma Stories app” the Chroma Labs team writes on its site. “We’re proud of this work, and look forward to continuing our mission at a larger scale – with one of the most important services in the world.”

We’ve reached out to Twitter for more details on the deal and any price paid. [Update: Twitter confirms this is an acquisition, not just and acquihire of the team as it first appeared, though Chroma Stories is shutting down. It refused to disclose the terms of the acquisition, but said all seven employees of Chroma Labs are coming aboard. The team will be working on the Conversations division at Twitter, and the deal is meant to boost its talent, leadership, and expertise for serving public discussions. A Twitter spokesperson also confirms that Chroma will shut down its .business and future versions of the app will not be available.]

Founded in late 2018, Chroma Labs had raised a seed round in early 2019 and counted Sweet Capital, Index Ventures, and Combine VC as investors. Barnett’s fellow co-founders include CTO Alex Li, who was an engineering manager on Facebook Photos and Instagram Stories; and Joshua Harris was a product design manager on the Oculus Rift and Facebook’s augmented reality filters. 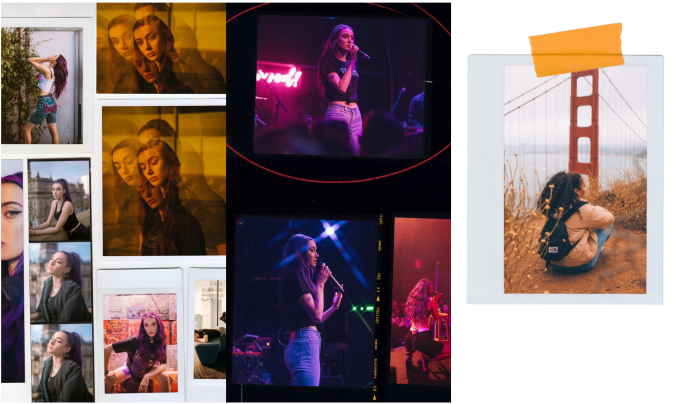 With Chroma Stories, you could choose between retro filters, holiday themed frames, and snazzy collage templates to make your Storie look special amidst the millions posted each day. Sensor Tower estimates Chroma Stories had 37,000 downloads to date. That tepid reception despite the app’s quality might explain why the team is joining Twitter.

By snatching up some of the smartest talent in visual storytelling, Twitter could give its text-focused app some spice. It’s one of the few social apps without a Stories product already, and its creative tools are quite limited. Better ways to lay out photos in tweets could make Twitter more beautiful and less exhausting to sift through. That might make it more appealing to teens and help it boost its user count, which now lags behind Snapchat.

Twitter has become the world’s public record for words. The Chroma Labs talent might make it the real-time gallery for art and design as well.

[Update 3:05pm Pacific: Twitter confirms that this is a full acquisition of the Chroma Labs company, not just an acquisition as we originally printed.]