On the heels of a furor over his tweets accusing MSNBC host Joe Scarborough of murder, Twitter has quietly begun to fact-check the president.

A new label prompting Twitter users to “Get the facts about mail-in ballots” appeared on a series of tweets in which the president baselessly claimed ballots received through mail-in voting methods are “fraudulent.” 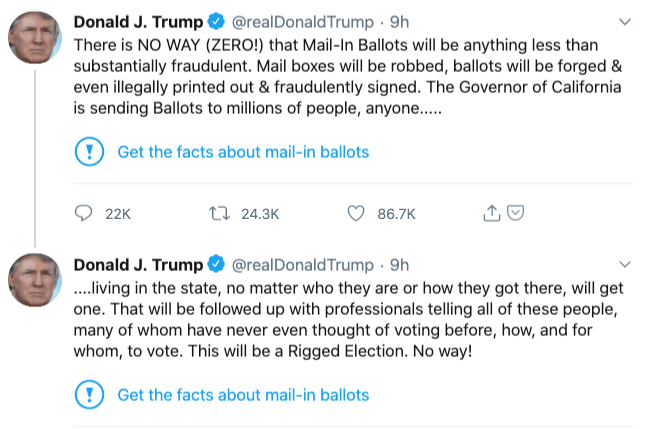 In a statement to TechCrunch, a Twitter spokesperson said the pair of tweets from the president “contain potentially misleading information about voting processes and have been labeled to provide additional context around mail-in ballots.”

“This decision is in line with the approach we shared earlier this month,” the spokesperson said, linking to the company’s recent blog post on its misinformation policies.

Clicking through the new prompt from Twitter brings users to a fact-checking page debunking the president’s false claims with the header “Trump makes unsubstantiated claim that mail-in ballots will lead to voter fraud.” The page also offers a summary of the issue with bullet points providing context for the misleading tweets and links to stories by CNN, the Hill, the Washington Post and other news sources. Still, the prompt itself stops short of calling the tweet’s claims incorrect or misleading, instead opting for neutral language.

Trump has railed against vote-by-mail efforts in recent weeks, in spite of the consensus view by experts that voting through the mail is a safe process — so safe that it’s already widely used for absentee ballots and relied upon in five states as the primary method for voting.

Reacting to Twitter’s decision to label two of his tweets, Trump attacked the company late Tuesday. In tweets, he accused Twitter of “interfering in the 2020 Presidential Election,” repeated his debunked claims that mail-in voting is plagued by fraud and threatened the company with unspecified retaliation.

….Twitter is completely stifling FREE SPEECH, and I, as President, will not allow it to happen!

Twitter plans to expand its misinformation labels — but will they apply to Trump?