The growing market of fantasy sports in India may soon have a new and odd entrant: ShareChat .

The local social networking app, which in August last year raised $100 million in a financing round led by Twitter, has developed a fantasy sports app and has been quietly testing it for six months, two sources familiar with the matter told TechCrunch.

ShareChat’s fantasy sports app, called Jeet11, allows betting on cricket and football matches and has already amassed more than 120,000 registered users, the sources said. The app, or its website, does not disclose its association with ShareChat.

A ShareChat spokesperson confirmed the existence of the app and said the startup was testing the product. “This is presently at an experimentation stage. Based on the outcome of the experiment, we will decide on the future of the product,” the spokesperson said.

Jeet11 is not available for download on the Google Play Store due to the Android maker’s guidelines on sports fantasy apps, so ShareChat has been distributing it through Xiaomi’s GetApps app store and the Jeet11 website (which offers the app installation file), and has been promoting it on Instagram. It is also available as a web app. 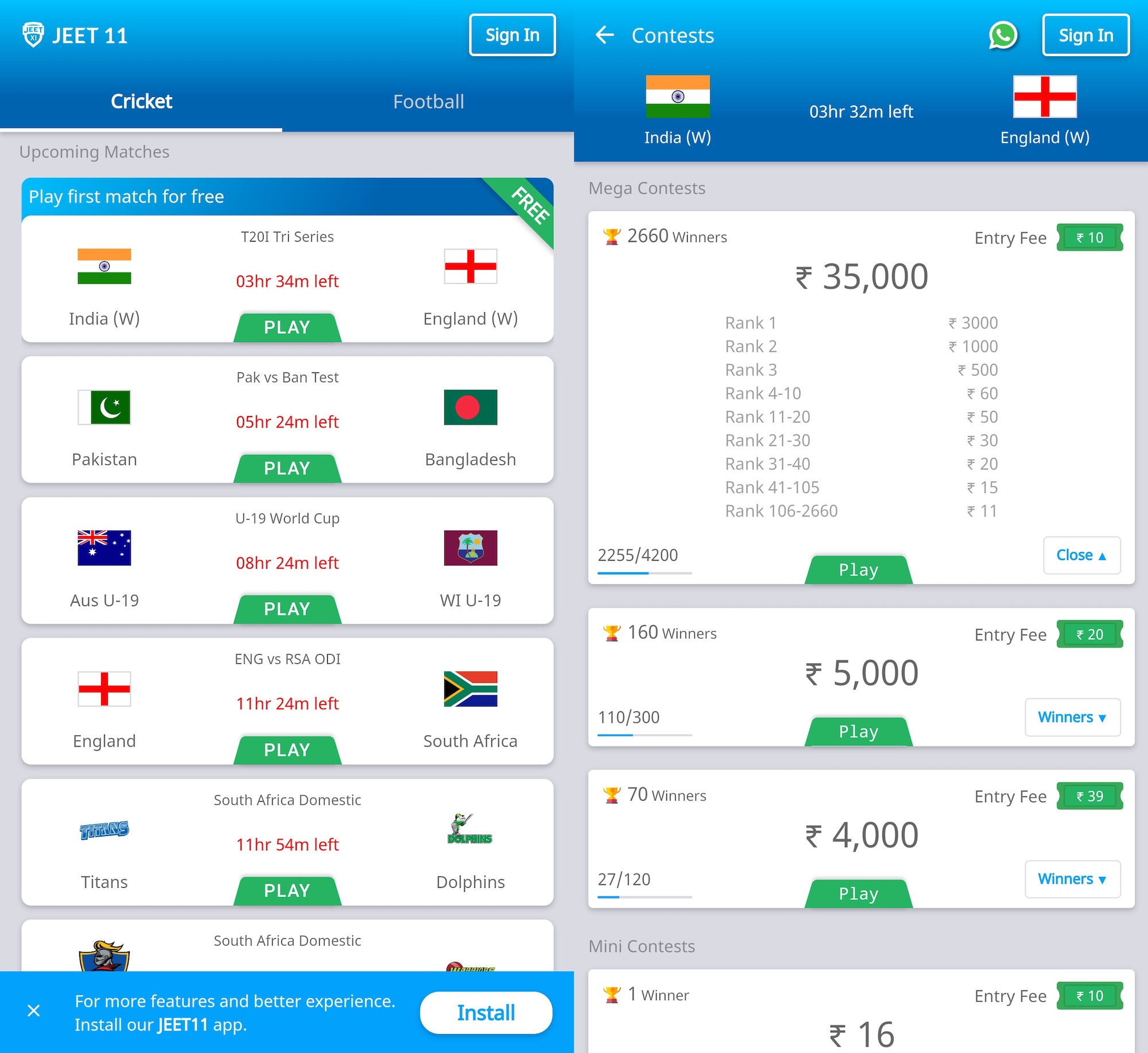 Fantasy sports, a quite popular business in many markets, has gained some traction in India in recent years. Dream11, backed by gaming giant Tencent, claimed to have more than 65 million users early last year. It has raised about $100 million to date and is already valued north of $1 billion.

Bangalore-based MPL, which counts Sequoia Capital India as an investor and has raised more than $40 million, appointed Virat Kohli, the captain of the Indian cricket team, as its brand ambassador last year.

In the last two years, scores of startups have emerged to grab a slice of the market, and the vast majority of them are focused on cricket. Cricket is the most popular sport in India, just ask Disney’s Hotstar, which claimed to have more than 100 million daily active users during the cricket season last year.

Or ask Facebook, which unsuccessfully bid $600 million to secure streaming rights of the IPL cricket tournament. It has since grabbed rights to some cricket content and appointed the Hotstar chief as its India head.

So it comes as no surprise that many sports betting apps have signed cricketers as their brand ambassador. Hala-Play has roped in Hardik Pandya and Krunal Pandya, while Chennai-based Fantain Sports has appointed Suresh Raina.

In India, too, several states, including Assam, Arunachal Pradesh, Odisha, Sikkim and Telangana, have banned fantasy sports betting. Jeet11 currently requires users to confirm that they don’t live in any of the restricted states before signing up for the service.

“It doesn’t help matters either that the fantasy sports business’ attempts at legitimacy involve trying to be seen as video games — a cursory glance at a speakers panel for any Indian video game developer event is evidence of this — rather than riding on its own merits,” said Rishi Alwani, a long-time analyst of Indian gaming market and publisher of news outlet the Mako Reactor.

An executive who works at one of the top fantasy sports startups in India, speaking on the condition of anonymity, said that despite handing out cash rewards to thousands of users each day, it is still challenging to retain customers after the conclusion of any popular cricket tournament. “And that’s after you have somehow convinced them to visit your website or download the app,” he said.

For ShareChat, which has been exploring ways to monetize its 60 million-plus users and posted a loss of about $58 million on no revenue in the financial year ending March 31, that’s anything but music to the ears. In recent months, the startup, which serves users in more than a dozen local languages, has been experimenting with ads. ShareChat has raised about $223 million to date.