Civil unrest due to the nationwide George Floyd protests drove Twitter to see a record number of new installs this week, according to data from two app store intelligence firms, Apptopia and Sensor Tower. While the firms’ exact findings differed in terms of the total number of new downloads or when records were broken, the firms agreed that Twitter’s app had its largest-ever week, globally.

Twitter’s usage is on the rise because of the immediacy around news-sharing its platform provides. This was in particular demand amid the George Floyd protests in the U.S., as protestors used Twitter to share live images and videos of the demonstrations, the fires and looting, instances of police brutality and more. Meanwhile, nonprotestors downloaded the app to watch the events unfold directly and get unfiltered, breaking news.

According to data from Sensor Tower, Twitter saw just over a million installs on Monday and around 1 million new installs on Tuesday — making Monday the day seeing the most single-day installs since at least January 1, 2014, when the firm began recording app store data. At its peak, U.S. installs this week were at a four-year high. On Wednesday, Sensor Tower estimates Twitter installs declined a bit causing the app to rank slightly lower on app store global charts.

Apptopia, on the other hand, found that Twitter topped its record for installs on Wednesday with 677,000 worldwide downloads. This included a near-record download figure of 140,000 installs in the U.S., with a larger number of installs coming from international markets, including the U.K., India, Brazil and Mexico. However, this U.S. download figure was the second-highest daily install number for the U.S. in Twitter’s lifetime, the firm said. 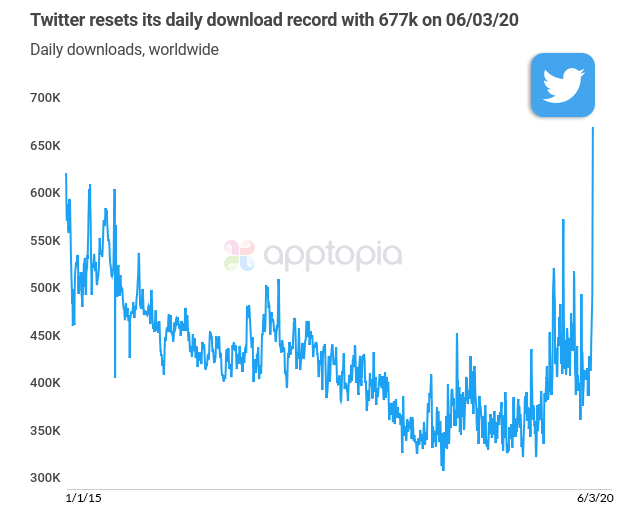 The truth between these two firms’ different numbers is probably somewhere in the middle. Sensor Tower routinely comes in with higher figures from Apptopia. But, from a broader viewpoint, the two firms tend to see the same overall in trends. In this week’s case, they both point to a breakout week for Twitter’s mobile app download growth.

While it may seem odd that Twitter saw more installs in non-U.S. markets, it is an indication that the world is watching these events unfold. But it’s also perhaps something of a perfect storm for Twitter demand, because the civil unrest isn’t the only driver for the international installs.

Many countries are also dealing with the COVID-19 pandemic, with Brazil being particularly hard hit right now, for example. That could be fueling other increased interest in the app, given its news-driven nature.

In addition to breaking download numbers, Apptopia also noted that yesterday was a record for daily active users on Twitter in the U.S., when some 40 million people in the U.S. logged into the app.

For comparison’s sake, Twitter reported its app had 31 million “monetizable” daily active users (mDAUs) in the U.S. in Q4 2019, which grew to 33 million in Q1 2020. An mDAU isn’t exactly the same metric as a daily active user. Rather, it’s a metric Twitter invented to count the number of logged-in users on its platforms that are capable of displaying ads. However, it’s now the only way Twitter reports its user data so it’s the closest comparison that can be offered.

To what extent these spikes in installs and usage play out longer term for Twitter remain to be seen, and we won’t know specifics until Twitter reports its updated metrics in its next quarterly earnings.

Source: Tech Crunch Social
Twitter has a record-breaking week as users looked for news of protests and COVID-19