Twitter today is joining the podcasting arena. This morning, the social network is launching its first-ever podcast series with a new show focused on Twitter’s advertising business, which it’s calling “Character Count.” The company says, for now, it’s testing the waters with five already produced episodes of around 25 to 30 minutes in length. It plans to wait to record more shows after getting the crowd’s reaction to the first few episodes, so it can make adjustments if need be.

The podcast will be hosted by Joe Wadlington, a marketer at Twitter who’s specifically supporting Twitter’s Business initiatives.

Each episode will involve talking to people behind the scenes of some of Twitter’s advertising stories, including the Monterey Bay Aquarium (@MontereyAq), Dropbox (@dropbox) and Simon & Schuster (@SimonBooks). The companies will speak about how they built effective ad campaigns and why Twitter’s audience mattered to them. The goal, says Twitter, is to offer others in the industry a look into which brands are “doing it right on Twitter,” and potentially spark more brands to do the same. 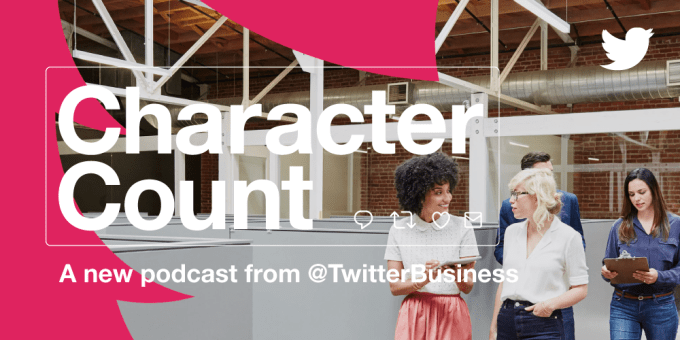 The launch of the podcast arrives when Twitter is trying to shift Wall Street’s attention away from the network’s stagnant user growth. Twitter recently said it would stop reporting monthly users, in favor of daily users, as a result of its inability to grow this key number. The change was announced in Twitter’s Q4 2018 earnings release, where the company said it had lost another 5 million monthly users in the final quarter of 2018, bringing its total down to 321 million.

Instead, Twitter wants more attention on its ability to turn a profit from the users it does have — as it did in Q4 for the fifth quarter in a row, and the fifth time ever. Its Q4 revenues were $909 million, which were more than the expected $868.1 million and up 24 percent on the year ago quarter. Advertising accounted for 87 percent of those revenues, Twitter said. It’s no surprise, then, that Twitter now wants to help advertisers learn from others succeeding in this space and grow that figure further.

Twitter is not the only company that’s tapping into the popular audio format of podcasting to talk to advertisers and marketers more directly.

In January, Facebook also launched its first U.S. podcast with a series focused on entrepreneurship — the larger, unspoken goal being to position Facebook as a place where entrepreneurs come to advertise their business. And somewhat related, LinkedIn debuted LinkedIn Live, a new video broadcast service that gives people and organizations the ability to stream real-time videos to groups in a sort of cross between YouTube Live and video podcasting, perhaps.

Twitter, like Facebook and LinkedIn, will not be running other ads within its programming. That makes sense, as the podcast itself is effectively an ad for Twitter’s business and advertising tools.