Twitter last fall introduced a new label that would allow what it calls the “good bots” on its service to identify themselves. While the word “bot” can often have a negative connotation, Twitter noted there were useful bots, too, which were automatically tweeting out useful information like COVID-19 updates, earthquake alerts, bills being introduced in Congres and more. These “good bot” labels, which had been in testing with a small group, are now publicly available to all automated account holders.

As during tests, the Twitter accounts that label themselves as bots will display this information on their Twitter profile. Underneath the account’s name and @username, a small robot icon appears next to the words “Automated by” followed by the name of the account’s operator. The Twitter bio, meanwhile, will detail the bot’s purpose.

When the bots tweet, their automated status will also be visible in users’ timelines.

Twitter says this information will help users to decide which accounts to follow, engage with and trust. 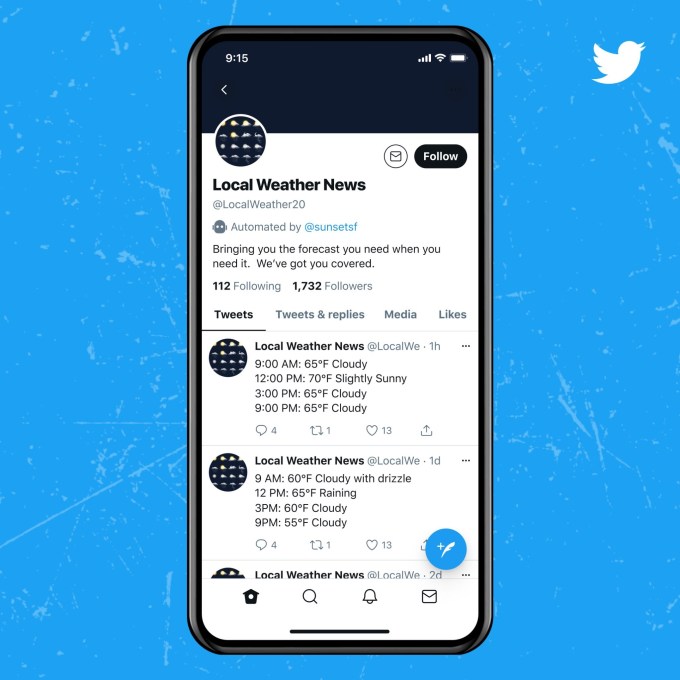 The account labels had been first made available to some 500 Twitter developer accounts in September, which tested the feature and offered feedback, including bots like @earthquakesSF, @vax_progress, @last100bills, @AltTxtReminder, @met_drawings and @EmojiMashupBot. These accounts represented a range of bot use, from critical updates to interesting information to fun content.

In addition to the “good bots,” many people automate their Twitter accounts in other ways — like using IFTTT integrations to tweet out links, for example. But Twitter has been less concerned about that sort of automated tweeting, it said — noting only that users should investigate any third-party application they use with their account and make sure to follow Twitter’s rules. 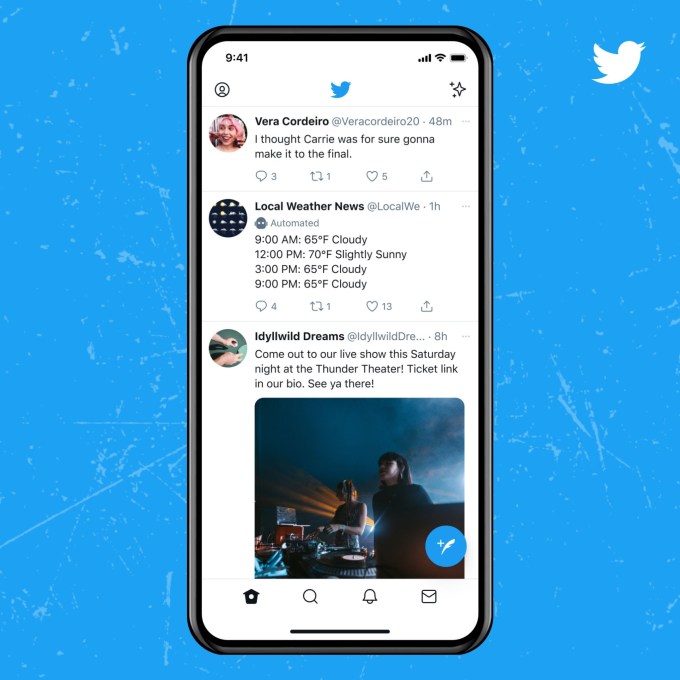 The bot labels, while useful, don’t necessarily address the larger issue with bots on Twitter’s service.

The bad bots can range from the annoying — like bots that tweet spam (or promote cryptocurrency schemes!) — to the more worrisome, like bots that try to influence upcoming elections. As an opt-in system, bot owners trying to do good with their creations will be able to add labels and promote themselves as the person behind the account. But bad bots won’t participate.

The feature is available today to automated accounts that use the Twitter API. But Twitter says there is no auditing of the system for now.

“All accounts on Twitter are subject to the Twitter Rules,” a Twitter spokesperson said. “As the label is opt-in only, we will not be auditing accounts that choose to adopt it at this time and will rely on our reporting process should an account violate the Rules.”

Twitter will discuss the news further on a Twitter Space at 3 pm PT today hosted by the Twitter Safety team, which will be followed by a developer demo on TwitterDev’s Twitch channel on Thursday at 11 am PT.