Updated with statements from Quds News Network and Twitter .

Twitter suspended accounts associated with Hamas and Hezbollah over the weekend after being repeatedly asked to do so by a bipartisan group of U.S. Representatives. The lawmakers — Josh Gottheimer (D-NJ), Tom Reed (R-NY), Max Rose (D-NY) and Brian Fitzpatrick (R-PA) — criticized the company for allowing the accounts to stay up even though Hamas and Hezbollah are designated as Foreign Terrorist Organizations by the United States government. 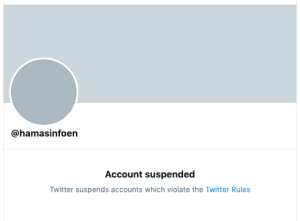 The accounts suspended include Hamas’ English and Arabic-language accounts, as well as ones belonging to Al-Manar, a television station linked to Hezbollah, and Palestinian news agency Quds News Network. Quds News Network issued a statement saying that it has not received an explanation from Twitter about the suspensions and that “QNN rejects the double-standards of social media, which are practiced when it comes to the Palestinian content.”

Raja Abdulhaq, co-founder of Quds News Network, told The Wall Street Journal that three of the news agency’s accounts had been removed and described the suspensions a “clear censorship of Palestinian narratives.”

Twitter initially told the congressmen that it distinguishes between political and military factions of those organizations. In an October 22 response, the House members told Twitter that “this distinction is not meaningful, nor is it widely shared. Hezbollah and Hamas are terrorist organizations as designated by the United States Government. Period.”

On November 1, Twitter’s director of public policy in the United States and Canada, Carlos Monje Jr., replied that the accounts had been suspended after a review.

Monje added that “Twitter also takes significant steps to identify accounts that are not directly affiliated with a designated foreign terrorist organization but which nonetheless promote or support violent extremism.”

In an email, a Twitter spokesperson told TechCrunch that “There is no place on Twitter for illegal terrorist organizations and violent extremist groups. We have a long history of taking strong enforcement action, using a combination of people, partnerships, and technology.”

The accounts’ suspension comes as social media companies, including Twitter, Facebook and YouTube, face increased scrutiny from lawmakers over what content and advertising they allow on their platform. Twitter recently said it would stop running political ads, an announcement that came after Facebook CEO Mark Zuckerberg defended his company’s policy of not fact-checking political ads while testifying in front of Congress last month.