Twitter is finally modernizing its core APIs after seven years of stagnation, and it wants early feedback from developers. That’s why today it’s launching Twitter Developer Labs, which app makers can sign up for to experiment with pre-release beta APIs. First up will be re-engineered versions of GET /Tweets and GET /Users APIs. The first functional changes will come next, including real-time streaming access to the Twitter firehose with the expansion of tweet filtering plus impressions and engagement metrics that were previously only available in its expensive enterprise API tiers. Twitter will also be adding newer features like Polls to the API.

Giving developers longer lead-times and more of a voice when it comes to rebuilding its APIs could help Twitter get more app makers paying for its premium API ($339 to $2,899 per month for just one specific API) and enterprise API tiers (even more expensive). It might also stimulate the creation of dev-made analytics, measurement and ads businesses that convince brands to spend more money on Twitter marketing. The Labs program and the first API endpoint changes will roll out in the coming weeks. To join, people can sign up for developer accounts, join an email list for updates on the Labs site, follow the TwitterDev account and start providing feedback.

Twitter’s data and enterprise solutions product manager Ian Cairns acknowledged some of the whiplash Twitter has put developers through in the past, rapidly changing strategies and restricting rate limits in ways that made developers’ businesses unsustainable. For example, last year a change broke many third-party Twitter reading clients. “There are certainly times over the years when the ways in which we’ve managed our APIS . . . have changed and we know some of those have changed in ways that have been disruptive to developers. What we’re doing with the Twitter Developer Labs program is focusing on trying to use that as a vehicle to build trust and make sure we’re having a two-way conversation and that the voice of the people who use our platform the most are driving the future.”

Twitter’s main API hasn’t been overhauled since its release in August 2012, despite a bunch of progress on enterprise and ads APIs in the meantime. The advantage of that is that the old API was optimized for backwards compatibility so developers didn’t have to constantly update their apps, allowing old utilities to survive. But that also prohibited integrating some newer features like Polls. Twitter plans to move to a more regular versioning system where breaking changes are communicated far enough in advance for developers to adapt. 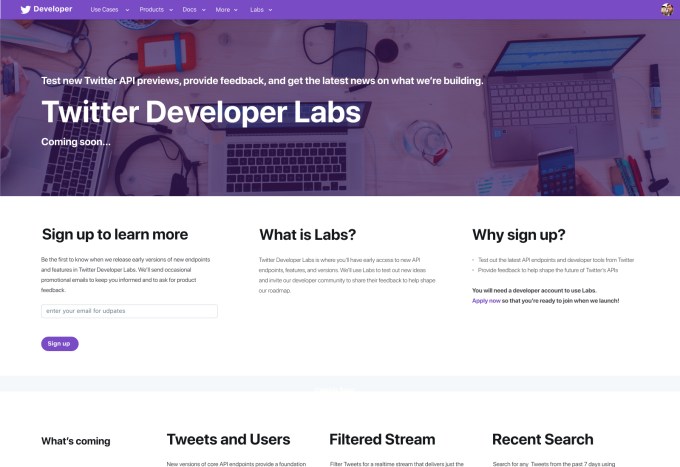 More recently, Twitter announced a streamlining of its APIs that also instituted the paid tiers in 2017. But last year it broke Twitter clients and sold its Fabric developer toolset to Google as part of cost-cutting measures that previously spelled the demise of Vine.  And this year, Twitter has made moves to crack down on API abuse for spamming and services for buying followers. That comes after the Cambridge Analytica scandal rocked confidence in developer platforms and forced their owners to limit functionality in order to preserve safety and privacy.

Developer Labs will serve as the nerdy brother of the new “twttr” beta consumer app that launched in March to let people try out potential changes to how replies and the feed work. Twitter writes that “Our initial focus in Labs will be on developers who work with conversational data, including academics and researchers who study and explore what’s happening on Twitter, and social listening and analytics companies that build products for other businesses.”

Twitter’s relationship with developers has always been rocky, in large part due to lack of communication. If a developer builds something, and then Twitter either messes it up with API changes or builds a similar feature itself, it can cost a ton in wasted engineering effort. If Labs opens a clearer dialogue with developers, Twitter could count them as allies instead of PR liabilities.