Tired of chatty drivers? Uber is finally giving users its most requested feature: an in-app way to ask for minimal conversation during your ride. The “Quiet Mode” feature is free and will be available to everyone in the US tomorrow, but only on Uber Black and Uber Black SUV premium rides. Users can select “Quiet preferred”, “happy to chat” or leave the setting at “No preference”. The desire for silence might convince more riders to pay for Uber’s more expensive vehicle types so they can work, nap, take a call, or just relax in the car. 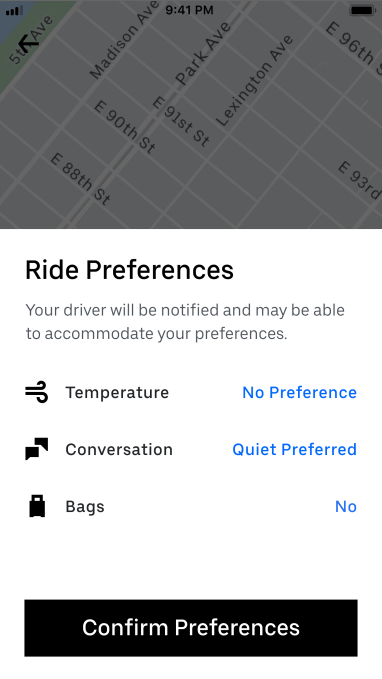 Quiet Mode comes as part of a new slate of Rider Preferences features that users can set up before they hail an Uber Black or SUV, but not while waiting for their ride or while in the car. A Bags option lets users signal that they have luggage with them so the driver knows to pull over somewhere they can help load them into the trunk. The Temperature control lets them request the car be warm or cold so drivers know whether to crank the air conditioning.

Uber Black drivers are now supposed to wait 15 minutes after arriving before cancelling on you as is standard with private car services, though you’ll start to be charged and they’ll be compensated after 5 plus they technically can cancel whenever they want. Uber Black riders will get premium phone support like members of Uber Rewards’ highest Diamond tier. And Uber is going to require nicer and newer cars for future drivers signing up for Uber Black, with centralized rules written by Uber HQ instead of local branches. “We’re looking to create more differentiation between the premium products and the regular products to encourage more trips” Uber product manager Aydin Ghajar tells me. Quiet Mode in particular “is something that people have been asking for for a long time”, and talkative drivers have been the subject of plenty of comedy sketches.

I think Quiet Mode is going to be a hit, perhaps because I requested that Uber build a “Quiet Ride Mode” in my December product wish list after suggesting it last July. The feedback I received from many male readers was that there are worse things than having to chat with a friendly driver, and it’s rude or dehumanizing to demand they stay silent.

But that ignores the fact that women often feel uncomfortable when male drivers incessantly talk to them, and it can get scary when it turns into unwanted flirtation considering the driver is in control. In many cases, riders may feel rude or frightened to reject conversation and ask out loud for quiet. That’s why I hope Uber plans to expand this to UberX as well as international markets, though the company had nothing to share on that.

What Uber’s Ghajar did reveal was that “the reaction of Uber black drivers was overwhelmingly positive because they want to deliver a great experience to their rider…but they don’t necessarily know what the rider wants. These guys take a lot of pride in what they do as customer service agents”.

Uber did extensive research of drivers’ perceptions in the three months it took to develop the feature. But due to employment laws, it can’t actually require that drivers abide by user requests for quiet, though they might get negative ratings if they ignore them. Ghajar insists “It’s not mandatory. The driver is an independent contractor. We’re just communicating the rider’s preference. The driver can have that information and do with it what they want.”

Given premium rides often cost 2X the UberX price and over 3X the UberPool price, Uber could make a lot of money encouraging upgrades.That’s crucial at a time when it’s desperate to improve its margins and shrink its losses after a weak IPO last week saw its new share price dip. With so many competing ride services around the world, Uber is wise to try to differentiate on customer service instead of just costly efforts to win with more cars, lower prices, and sharper algorithms.