Meta’s recently crowned president of global affairs, Nick Clegg — who, in a former life, was literally the deputy prime minister of the U.K. — has been earning his keep in California by penning an approximately 8,000-word manifesto to promo “the metaverse”: aka, the sci-fi-inspired vapourware the company we all know as Facebook fixed on for a major rebranding last fall.

Back then, founder and CEO Mark Zuckerberg, pronounced that the new entity (Meta) would be a “metaverse-first” company “from now on”. So it’s kinda funny that the key question Clegg says he’s addressing in his essay is “what is the metaverse” — and, basically, why should anyone care? But trying to explain such core logic is apparently keeping Meta’s metamates plenty busy.

The Medium post Clegg published yesterday warns readers it will require 32 minutes of their lives to take in. So few people may have cared to read it. As a Brit, I can assure you, no one should feel obliged to submit to 32 minutes of Nick Clegg — especially not bloviating at his employer’s behest. So TechCrunch took that bullet for the team and read (ok, skim-read) the screed so you don’t have to.

What follows is our bullet-pointed digest of Clegg’s metaverse manifesto. But first we invite you to chew over this WordCloud (below), which condenses his ~7,900-word essay down to 50 — most boldly featuring the word “metaverse” orbiting “internet”, thereby grounding the essay firmly in our existing digital ecosystem.

Glad we could jettison a few thousand words to arrive at that first base. But, wait, there’s more! 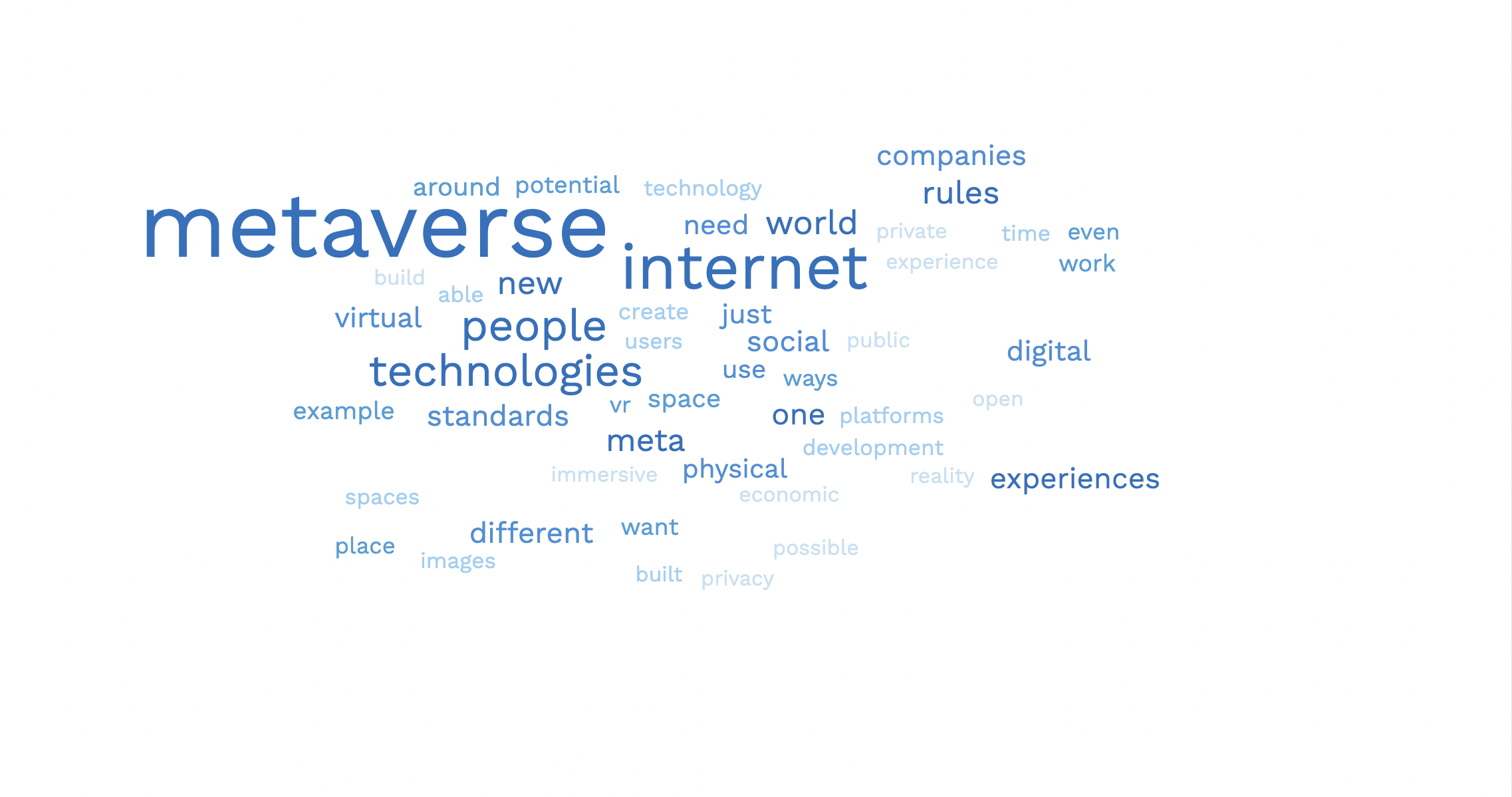 Fun found word pairs that leap out of the CleggCloud include “companies rules” (not democratic rules then Clegg?); “people technologies” (possibly just an oxymoron; but we’re open to the possibility that it’s a euphemistic catch-all for ill-fated startups like HBO’s Silicon Valley‘s (satirical) ‘Human Heater’); “around potential” (not actual potential then?); “meta physical” (we lol’d); and — squint or you’ll miss it! — “privacy possible” (or possibly “possible privacy”).

The extremely faint ink for that latter pairing adds a fitting layer of additional uncertainty that life in the Zuckerberg-Clegg metaverse will be anything other than truly horrific for privacy. (Keen eyed readers may feel obligated to point out that the CleggCloud also contains “private experience” as another exceptionally faint pairing. Albeit, having inhaled the full Clegg screed, we can confirm he’s envisaging “private experience” in exceptional, siloed, close-friend spaces — not that the entire metaverse will be a paradise for human privacy. Lol!)

Before we move on to the digest, we feel it’s also worth noting a couple of words that aren’t used in Clegg’s essay — and so can only be ‘invisibly inked’ on our wordcloud (much like a tracking pixel) — deserving a mention by merit of their omission: Namely, “tracking” and “profiling”; aka, how advertising giant Meta makes its money now. Because, we must assume, tracking and profiling is how Meta plans to make its money in the mixed reality future Clegg is trying to flog.

His essay doesn’t spare any words on how Meta plans to monetize its cash-burning ‘pivot’ or reconfigure the current “we sell ads” business model in the theoretical, mixed reality future scenario he’s sketching, where the digital commerce playground is comprised of a mesh of interconnecting services owned and operated by scores of different/competing companies.

But perhaps — and we’re speculating wildly here — Meta is envisaging being able to supplement selling surveillance-targeted ads by collecting display-rents from the cottage industry of “creators” Clegg & co. hope will spring up to serve these spaces by making digital items to sell users, such as virtual threads for their avatars, or virtual fitting rooms to buy real threads… (‘That’s a nice ‘Bored Ape T-Shirt’ you’re planning to sell — great job! — but if you want metamates to be able to see it in full glorious color you’ll want to pay our advanced display fees’, type thing. Just a thought!)

Now onwards to our digest of Clegg’s screed — which we’ve filleted into a series of bulleted assertions/suggestions being made by the Meta president (adding our commentary alongside in bold-italics). Enjoy how much time we’ve saved you.

Source: Tech Crunch Social
We (skim)read Meta’s metaverse manifesto so you don’t have to…