WeAre8 launches crowdfunder for its social media app, where users are paid to watch ads

With Elon Musk’s recent interest in Twitter, Facebook’s growth flattening and TikTok’s meteoric rise, it feels like the world of social media is back into some kind of inflection point period. Consumers seem hungry to try out new platforms again, and entrepreneurs are delivering. Last year the Supernova app launched as an “ethical alternative to instagram”. Now a new social media startup — WeAre8 — hopes to literally pay consumers for their attention, and is even going out for a crowdfunding round of equity investment to do it.

I would be as skeptical as anyone else that these startups wouldn’t have a chance against the Big Tech social platforms, were it not for the fact that WeAre8 is the brainchild of a highly experienced advertising industry entrepreneur who understands the advertising model of social media inside-out and thinks she has the answers to tackle it.

Sue Fennessy emerged from Australia but took her advertising data startup to New York in 2009. Standard Media Index (SMI) has now become one of the staples of the advertising industry, providing data on global media agency expenditure data for all major media and product categories.

A couple of years ago she became incensed at the amount of money going into social media platforms like Facebook, where platforms like it were being used to spread mis- and dis-information about everything from politics to the pandemic.

Fennessy told me that SMI had tracked $250 billion of ad money spent around the world: “All of this money was going to Google and Facebook. And on a macro level, I became massively distressed because we were seeing journalism implode [WeAre8 recently sponsored the Byline journalism festival]. We saw the misinformation about the climate, and the pandemic, and yet the average engagement rate on a digital ad on Facebook is under 1%. So we thought, how can we have $100 billion last year — and a billion of that was from charities — paying Facebook, and yet such appalling advertising effectiveness for brands.”

It was then that she decided that a model where consumers were paid for their attention might have both good traction with consumers as well as the potential to attract ad spend from brands more effectively. Thus WeAre8 was born as a new social media app to capitalise on this model. On WeAre8, more than 60% of all ad spend goes directly to its users and “impact” oriented causes.

Fennessy says the genus of Facebook was that they made it easy for anyone to buy adverts, through Facebook Ad Manager. So she plans to build out an equally easy ad-buying backend to WeAre8: “We’ve built our sustainable Ad Manager, which has now been deployed across the industry so it makes it easy to buy.”

On the WeAre8 app consumers watch an ad for two minutes a day and get paid for their time. The startup says this “democratizes” digital advertising, and puts putting people and the planet — not tech companies — back into the business model for social media. Some 55% of the ad-spend on the platform is shared directly with people and charities, with another 5% going to a creator fund for “micro shows”, collaborations and monthly challenges on the platform’s main social feed, “8Stage”, which is, claims Fennessy, a “hate-free evolution of the social feed”. 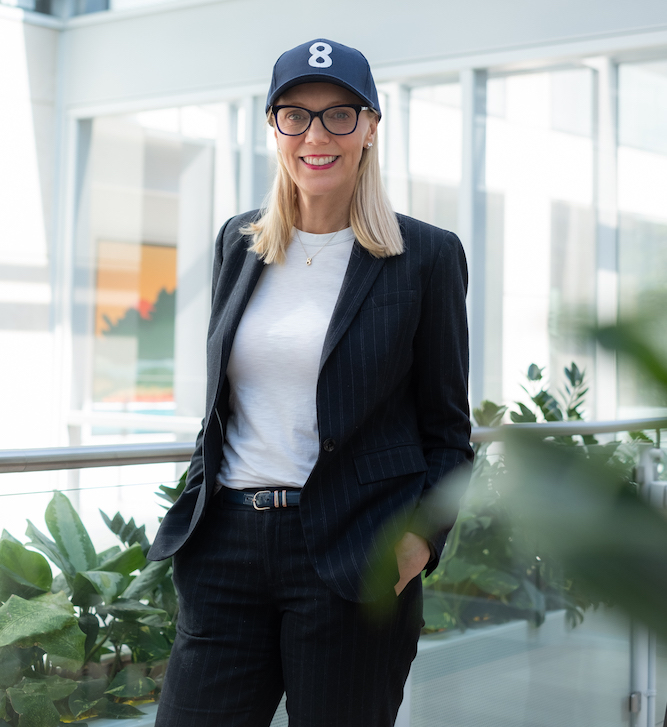 Indeed, Fennessy is quite the “Che Guevara” about this issue. “Now is the time to unite against the social media giants and reclaim our economic power…. Social media is our framework for democracy and it should be owned by the people and value them. WeAre8 has built this technology,” she says.

Whether or not you agree with her, she’s also found passionate supporters in her celebrity investors. As Balding says: “I am very careful about when and how I use social media, so I am really excited about how positive WeAre8 is as a platform. I love that there is now a place where millions of people can come and give their time to make a small contribution, which collectively becomes a huge fundraising initiative for various charities.”

As well as this new Crowdcube funding round, last month WeAre8 announced its $15 million Series B investment from Channel 4 Ventures, the U.K.’s largest “media for equity” fund, and Centrestone Capital.

New investors into the Series B round include UKTV Ventures, an investment fund by commercial broadcaster UKTV, whose parent company is BBC Studios, which offers startups advertising in exchange for equity, to the equivalent of $1.2 million in advertising airtime, that will be delivered over UKTV’s seven television channels (Dave, W, Gold, Alibi, Drama, Yesterday, Eden).

But Fennessy isn’t just talking these issues up just for kicks. WeAre8 is also a certified B Corp company, which requires it to report on sustainability and ethical values.

Assuming WeAre8 spends this money wisely, it has a shot at getting some users on its platform, and even claims to be aiming for 80 million people on the app by the end of 2022.

But in order to do that, it will have to get many more U.S. users, and history shows that celebrity endorsement is rarely enough to win over  consumers. Paying people actual cash money may help — but it will also have to make sure some enterprising hackers don’t end up gaming the system somehow…