Welcome to DFW and Construction Hell 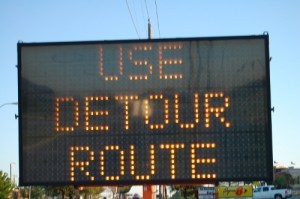 Recently I was chatting with my mom who moved out of state a few years ago. I had told her a couple of times that if she visited DFW anytime in the future, she wouldn’t recognize it. On this recent call she asked how all of the road construction projects around the area were going.  I had two words:

After living here for nearly 40 years, I am both excited for the growth and dismayed at the growing pains.  As of this writing, I cannot go any direction from my house on any main road without running into a major road project within 5 minutes. Luckily the major freeway project two blocks away from home stops by 8pm – probably because everything surrounding it is residential. If I’m dealing with a late day and not getting back to the house by that time, the major clusterfork in Grapevine is enough. They work on that one 24/7.

It sounds as if things are going to be finishing up in about 2-3 more years, according to several reports I’ve read. On a recent drive to the North Dallas/Plano area recently, i did notice that the 121/N. Dallas Tollway exchange was mostly done and being put to good use. HOORAY! Progress! Meantime with the rest of the construction hell, it’s best to have a bottle of water, a granola bar, and your favorite music on hand. You’ll be sitting there for a while.