Why Luckin’s ultimate target may not be Starbucks

Starbucks plans to double its store count in China to 5,000 in 2021 and Luckin, a one-year-old coffee startup, is matching up by aiming to reach 4,500 by the end of this year. Luckin’s upsized $651 million flotation has brought American investors’ attention to this potential Starbucks rival in China, where the Seattle giant controlled over half of the coffee market as late as 2017. But as soon as you make your first purchase with Luckin, you realize its ultimate goal may not be to topple Starbucks.

To get your caffeine intake from Luckin, the ordering process happens entirely on its app. First, you will decide how you want to fetch the drink: have it delivered within 30 minutes, pick it up at a nearby Luckin kiosk, or sit back and sip at one of its full-on cafes, or what it calls ‘relax stores.’

Say you’re tied up at the desk, you can input your location to check if you’re within Luckin’s delivery radius. Luckin has essentially built a vast coffee delivery network through its partnership with one of China’s biggest courier services SF Express, which dispatch staff to ferry the drinks on scoot fleets. 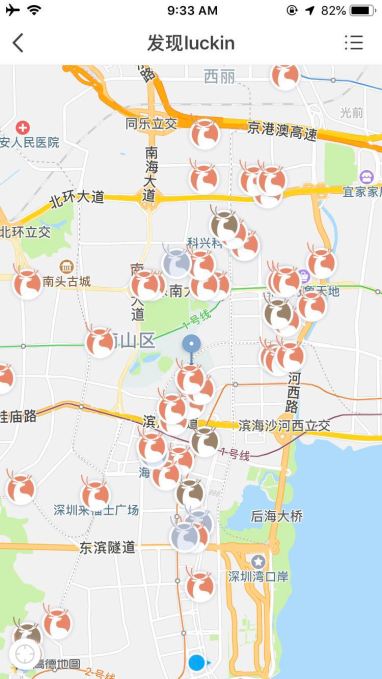 You then place the order, choosing from a range of drinks and customizing it — hot or cold, the amount of sugar and portions of creamer, the type of syrup flavor and the likes. When you get to the end, Luckin will ask you to pay via its app. If you’re a first-time user, you get a ‘first order free’ voucher, a common strategy for many Chinese consumer-facing apps to lure new users.

Source: Tech Crunch Social
Why Luckin’s ultimate target may not be Starbucks