YouTube today is launching a new vertical called YouTube Fashion that aims to capitalize on the popular style and beauty content that attracts millions of viewers to its platform. According to Statista, beauty videos last year alone generated more than 169 billion views on YouTube, and more recently, some of fashion’s biggest names have set their sights on YouTube. Today, YouTube says the number of Fashion & Beauty channels on the site have grown more than 6X from 2014 to 2018, and combined, generated billions of views in 2018.

The new vertical, YouTube.com/Fashion, will attempt to better organize some of this content, including style videos from top creators, industry collabs, live streams from the runway, inside looks into the fashion industry, behind-the-scenes video, vlogs from fashion icons and more.

Among the names and brands YouTube mentioned as prominent examples of what you’ll find on the new, top-level destination, there’s: 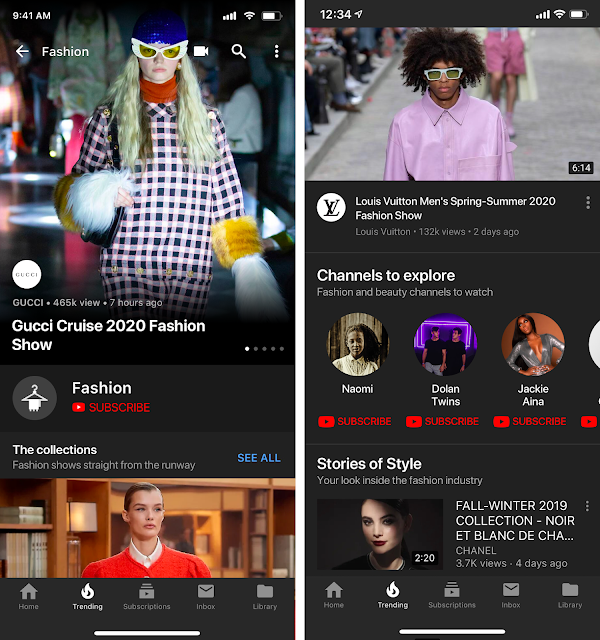 The launch comes at a time when Instagram has so well established its platform as a destination for style and fashion that it’s now entered into the e-commerce market as well, enabling brands to sell directly to Instagram users who can shop and check out through the social app itself. And with its IGTV platform for long-form videos, it’s working to become more of a YouTube rival.

YouTube, meanwhile, is better known for establishing beauty stars like Yuya, Bethany Mota, Michelle Phan,  Zoe Sugg, James Charles, Tati Westbrook, Jaclyn Hill and others, who have gained traction for their makeup reviews and tutorials — and sometimes, their feuds. It has even launched a new ad unit targeting the beauty category, that uses AR to let viewers try on makeup themselves.

The company knows the potential in fashion, however — even if it’s been accused in the past of not paying enough attention to the category, despite having fashion-focused creators with millions of subscribers and hundreds of millions of video views.

Things are now starting to change on this front. Last June, YouTube hired Derek Blasberg, previously the host of CNN Style and a Vanity Fair contributor, as its new head of fashion and beauty partnerships. At YouTube, Blasberg has fostered collaborations between top creators and brands in order to better elevate the profiles of the brands and the YouTube stars.

With the launch of /Fashion, YouTube now plans to bring more international voices to the new destination and localize the page for global markets, Blasberg says, writing on the YouTube blog.

Dedicating a vertical to a particular type of content is nothing new for YouTube. As YouTube moved away from running a standalone Twitch competitor, for example, it launched a /Gaming destination on YouTube.com. It’s now one of the fastest-growing verticals on the site.

YouTube Fashion can be found on the YouTube homepage and in the mobile app, where you can subscribe to the category itself, instead of just individual creators.

It’s now one of only a few categories to get top billing on YouTube — a list that also includes Movies & Shows, Gaming and Live.