Zuckerberg defends politician ads that will be 0.5% of 2020 revenue

As Jack Dorsey announced his company Twitter would drop all political ads, Facebook CEO Zuckerberg doubled-down on his policy of refusing to fact check politicians’ ads. “At times of social tension there has often been an urge to pull back on free expression . . . We will be best served over the long term by resisting this urge and defending free expression.”

Still, Zuckerberg failed to delineate between freedom of expression, and freedom of paid amplification of that expression which inherently favors the rich.

One clear objective was to dispel the idea that Facebook was motivated by greed to keep these ads. Zuckerberg explained “We estimate these ads from politicians will be less than 0.5% of our revenue next year.” For reference, Facebook earned $66 billion in the 12 months ending Q3 2019, so Facebook might earn around $330 million to $400 million in political ads next year. [Update: It wasn’t clear if issue ads and PAC ads were counted in Facebook’s 0.5% figure, but now the company says that number is just for ads run directly by politicians.]

Zuckerberg also said that given Facebook removed 50 million hours per day of viral video watching from its platform to support well-being which hurt ad viewership and the company’s share price, Facebook clearly doesn’t act solely in pursuit of profit.

We just shared our community update and quarterly results. Here’s what I said on our earnings call. — Before we…

Facebook’s CEO also tried to bat down the theory that Facebook is allowing misinformation in political ads to cater to conservatives or avoid calls of bias from them. “Some people say that this is just all a cynical political calculation and that we’re acting in a way that we don’t really believe because we’re just trying to appease conservatives” he said, responding that “frankly, if our goal was that we’re trying to make either side happy then we’re not doing a very good job because I’m pretty sure everyone is frustrated.”

Instead of banning political ads, Zuckerberg voiced support for increasing transparency about how ads look, how much is spent on them, and where they’re run. “I believe that the better approach is to work to increase transparency. Ads on Facebook are already more transparent than anywhere else. We have a political ads archive so anyone can scrutinize every ad that’s run.”

He mentioned that political ads are run by “Google, YouTube, and most internet platforms”, seeming to stumble for a second as he was likely prepared to cite Twitter too until it announced it would drop all political ads an hour earlier. He omitted that Pinterest and TikTok have also banned political ads.

It doesn’t help that hundreds of Facebook’s own employees have called on their CEO to change the policy. He concluded that no one could accuse Facebook of not deeply thinking through the question and its downstream ramifications. Zuckerberg did leave himself an out if he chooses to change the policy, though. “I’ve considered whether we should not [sell political ads] in the past, and I’ll continue to do so.”

Dorsey had tweeted that “We’ve made the decision to stop all political advertising on Twitter globally. We believe political message reach should be earned, not bought.” Democrat Representative Alexandria Ocasio-Cortez expressed support for Twitter’s move while Trump campaign manager Brad Parscale called it “a very dumb decision”

Twitter’s CEO took some clear swipes at Zuckerberg, countering his common arguments for allowing misinformation in politician’s ads. “Some might argue our actions today could favor incumbents. But we have witnessed many social movements reach massive scale without any political advertising. I trust this will only grow.” Given President Trump had outspent all Democratic candidates on Facebook ads as of March of this year, it’s clear that deep-pocketed incumbents could benefit from Facebook’s policy. 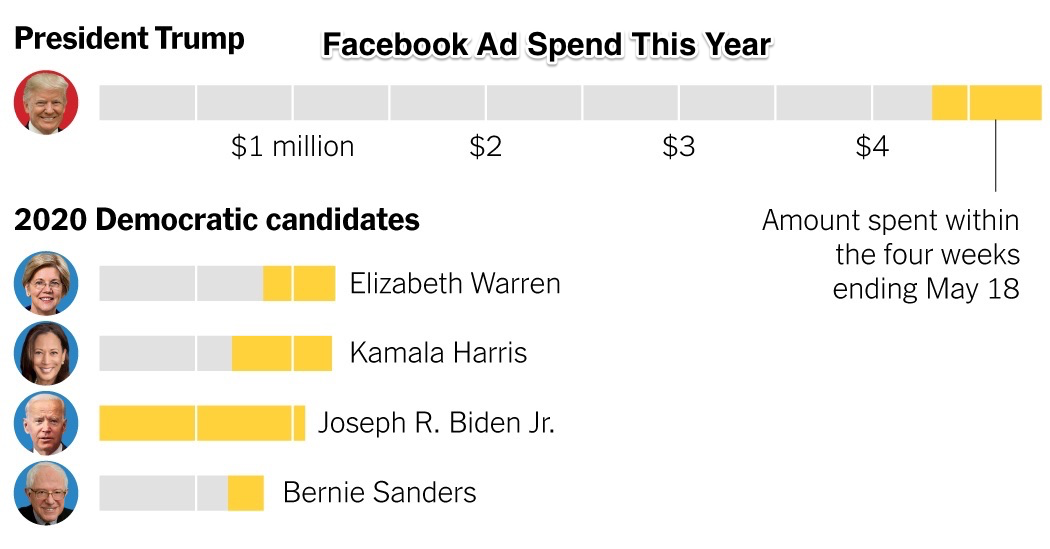 Miming Facebook’s position, Dorsey tweeted “It‘s not credible for us to say: ‘We’re working hard to stop people from gaming our systems to spread misleading info, buuut if someone pays us to target and force people to see their political ad…well…they can say whatever they want!”

Twitter doesn’t earn much from political ads, citing only $3 million in revenue from the 2018 mid-term elections, or roughly 0.1% of its $3 billion in total 2018 revenue. That means there will be no major windfall for Facebook from Twitter dropping political ads. But now all eyes will be on Facebook and Google/YouTube. If Sundar Pichai and Susan Wojcicki move in line with Dorsey, it could make Zuckerberg even more vulnerable to criticism.

$330 million might not be a big incentive for Facebook or Zuckerberg, but it still sounds like a lot of money to earn from ads that potentially lie to voters. I respect Facebook’s lenient policy when it comes to speech organically posted to users, organizations, or politicians’ own accounts. But relying on the candidates, press, and public to police speech is dangerously idealistic. We’ve seen how candidates will do anything to win, partisan press will ignore the truth to support their team, and the public aren’t educated or engaged enough to consistently understand what’s false.

Zuckerberg greatest mistakes have come from overestimating humanity. Unfortunately, not everyone wants to bring the world closer together. Without safeguards, Facebook’s tools can help tear it apart. It’s time for Facebook and Zuckerberg to recognize the difference between free expression and paid expression.

Source: Tech Crunch Social
Zuckerberg defends politician ads that will be 0.5% of 2020 revenue