Facebook plans to challenge Europe’s top court, which today ruled that EU countries can order Facebook to globally remove content that violates local laws. Facebook currently complies with proper legal requests to remove content that breaks a nation’s laws, but can leave it up for global viewers if the post doesn’t violate its Community Standards.

But today during a livestreamed Q&A with Facebook employees, CEO Mark Zuckerberg said that “This is something I expect us and other companies will be litigating.”

Live from our weekly internal Q&A

Live from our weekly internal Q&A

Zuckerberg explained that Facebook had “successfully fought” overly broad takedown requests in the past. He also noted that “a lot fo the details about exactly how [the ruling gets] implemented will depend on national courts across Europe.”

“This judgement raises critical questions around freedom of expression and the role that internet companies should play in monitoring, interpreting and removing speech that might be illegal in any particular country.

At Facebook, we already have Community Standards which outline what people can and cannot share on our platform, and we have a process in place to restrict content if and when it violates local laws. This ruling goes much further.

It undermines the long-standing principle that one country does not have the right to impose its laws on speech on another country. It also opens the door to obligations being imposed on internet companies to proactively monitor content and then interpret if it is “equivalent” to content that has been found to be illegal.

In order to get this right national courts will have to set out very clear definitions on what “identical” and “equivalent” means in practice. We hope the courts take a proportionate and measured approach, to avoid having a chilling effect on freedom of expression.”

Zuckerberg hadn’t done a livestreamed Q&A recently, but holds them weekly inside Facebook. Yet after The Verge’s Casey Newton published two-hours of leaked audio from Facebook internal all-hands meetings, Zuckerberg is trying to show he has nothing to hide. 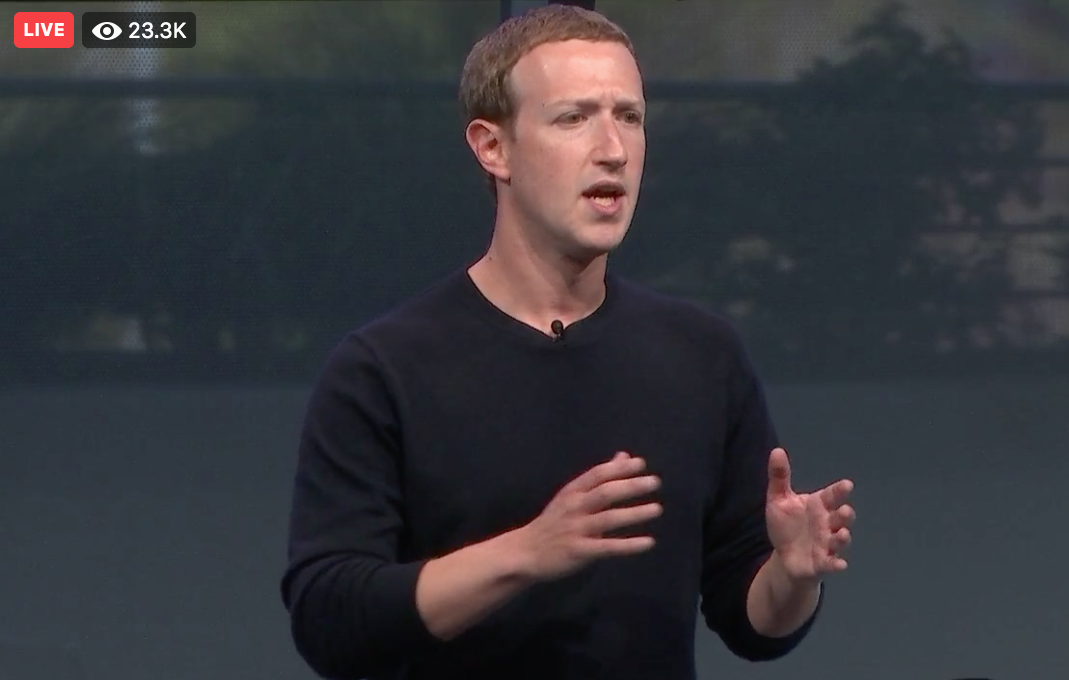 During pre-question remarks, Zuckerberg also discussed the US Attorney General Bill Bar’s open letter from the US, UK, and Australia demanding that Facebook halt the expansion of encryption across all its messaging apps. “We get that there are real concerns with doing that ” Zuckerberg said. “There are these different equities we try to balance”, specifically safety needs like catching child abusers and terrorists versus privacy and protecting political dissidents as well as normal citizens.

The CEO argued Facebook could still police encrypted apps, noting the “There’s a lot we can do with detecting patterns” including linking accounts together so it can shut down the WhatsApp accounts of bad actors on Facebook, and that Facebook can “find it upstream” by analyzing suspicious activity outside of the messages threads themselves. He also mentioned that iMessage is the top US messaging app and it’s encrypted too, showing Facebook isn’t the only one pushing private messaging and clearly users want it.

Queried about Bernie Sanders’ statement that “billionaires shouldn’t exist”, Zuckerberg said “no one deserves to have that much money”. That’s despite having a fortune north of $60 billion, though much of it is dedicated to the Chan Zuckerberg Foundation that works on social and science causes.

Zuckerberg was asked about concerns that his comments regarding Facebook would likely sue to stop an attempt by regulators to break it up. He’d discussed how Presidential candidate Elizabeth Warren had made the break-up a core piece of her policy slate, which led to questions about whether Facebook might try to minimize the reach of her statements or avoid voter registration that could aid.

Zuckerberg crystallized the question, saying “If Facebook is worried about Elizabeth Warren becoming president because of that thing, …how can we be trusted to be impartial and make sure she and other people get a voice?” He said that “Even when people disagree with what I think would be good…I still want to give them a voice . . . We need to be able to put what people want to express…above our preferences all the time.”

Today’s session certainly felt more guarded than the leaked Q&As. At one point Zuckerberg noted he wouldn’t share stats on Facebook Dating because it wasn’t a private discussion. Yet the talk still helped clarify critical Facebook policy positions are a tumultuous time for the company.

Zuckerberg joked at the beginning of the Q&A that he’s making this one publicly available because “I do such a bad job in interviews that it’s like, what do we have to lose?”